Karen & Larry’s Denver wedding at the J.W. Marriott was full of emotional touches and lots of fun…

Karen was a Rockette for 14 years, and is now the Creative Director.  Larry moved to NYC with a backpack and made his way into Theater/Film/TV as an Actor, Producer, and Director.  They met while working at Radio City, at a dinner party where Larry was the only straight guy there.

Larry thought Karen lived in an entirely different world than he, but he watched her and saw a fierce leader fueled by the love of what she did.  Karen thought Larry was charming, sexy, smart, and funny, and had a way of seeing right through her, even though he was a little awkward around her.

Their relationship began as friends as they were at very different places in their lives.  They genuinely enjoyed spending time together and could talk for hours and they always wanted to hang out.  Larry says, “Time passed, things changed in our lives and suddenly we realized that “chemistry is chemistry is fucking chemistry” and boom goes the dynamite and all that shit”.

Their proposal, written in Larry’s words, is absolutely priceless – see below for the full story…. 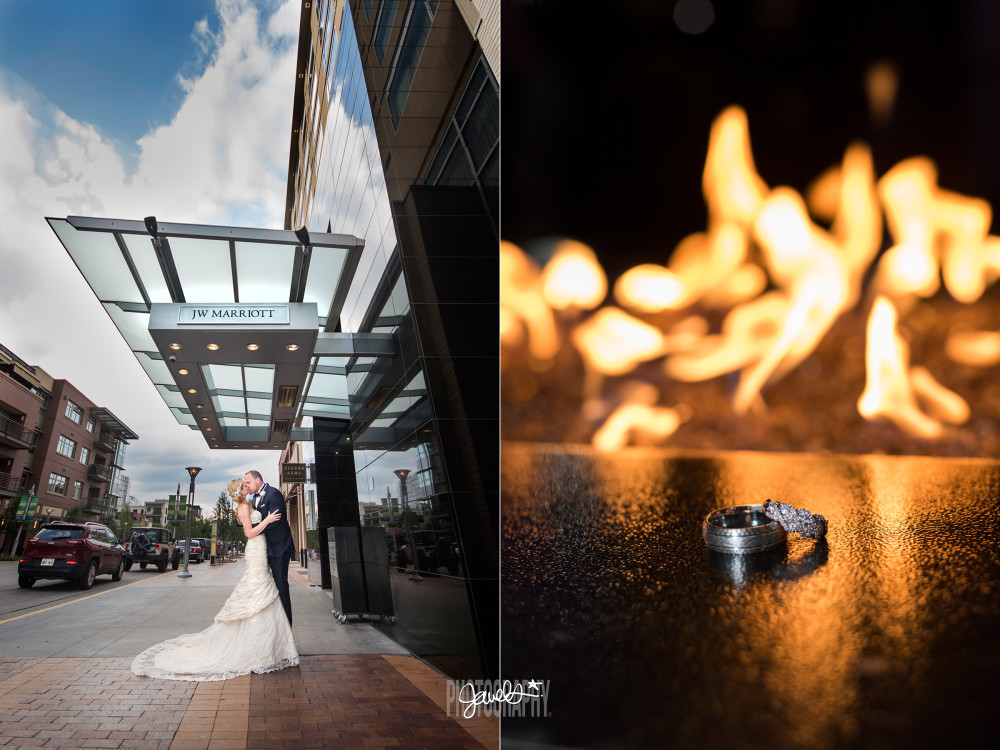 The wedding was especially emotional because Karen’s mother passed away only 10 days after Larry’s father.  They chose to get married in the park behind the house Larry grew up in, a place his father cherished.

Their reception at the newly remodeled event space, Fireside at the J.W. Marriott in Cherry Creek, was stylish, fun, and chic. “Fireside features two walls of glass doors that open up to an enchanting outdoor space complete with two roaring fire pits, lounge seating and festoon lights. The Fireside space features LED chandeliers with color enhancements and can be utilized year-round thanks to both heating and cooling. ”  Contact Leorah Young for more information at (303) 253-3092 JW Marriott Denver

Here are some of our favorite photos… 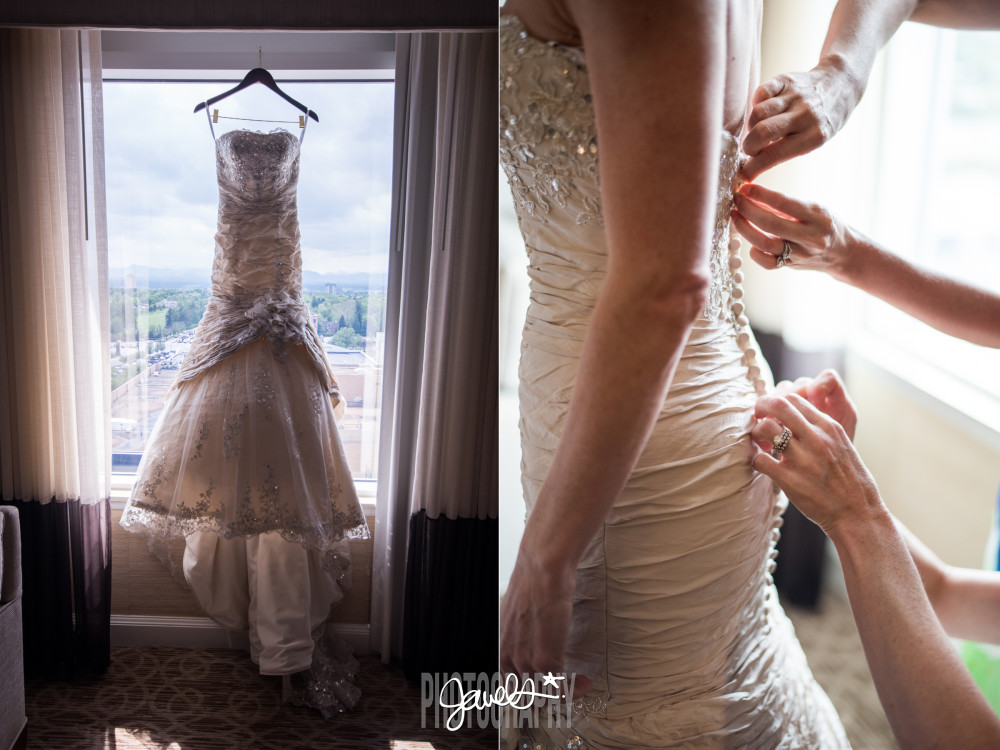 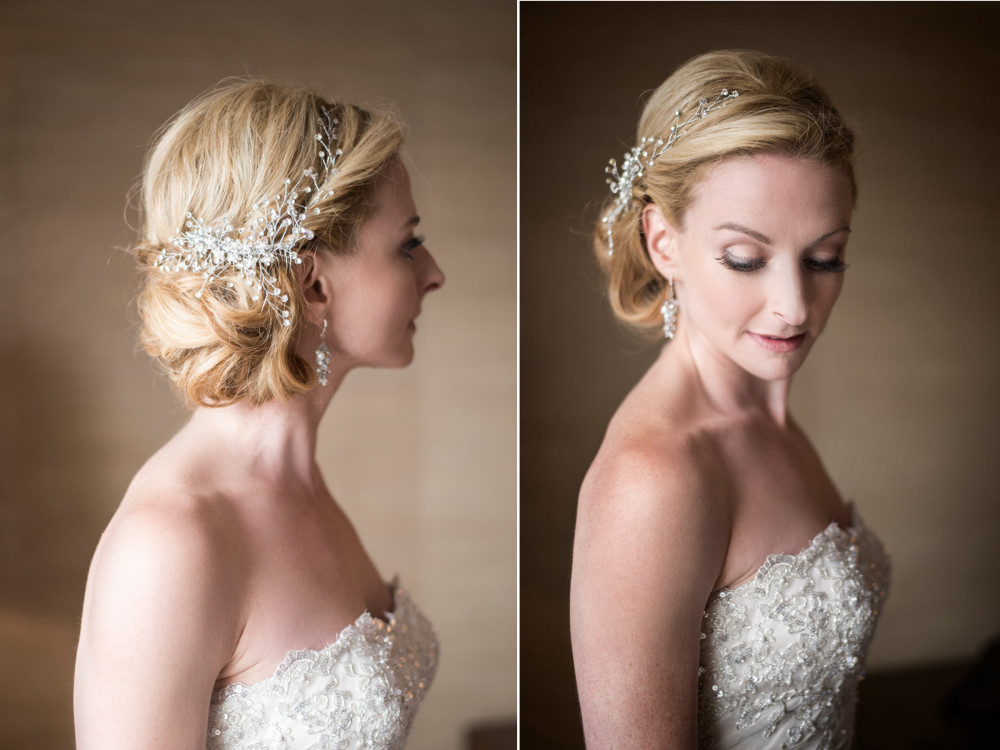 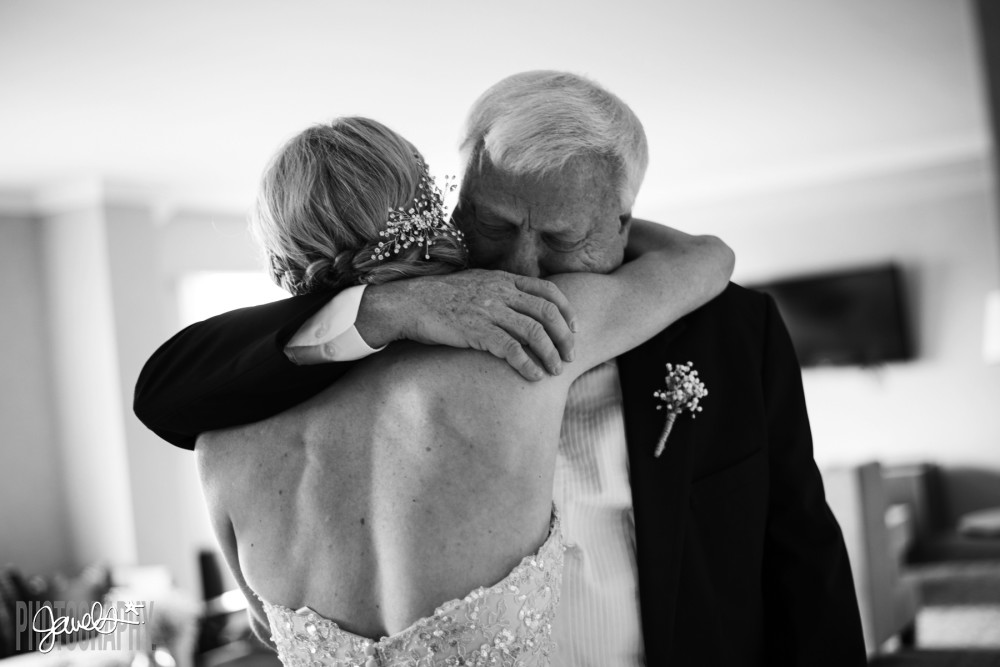 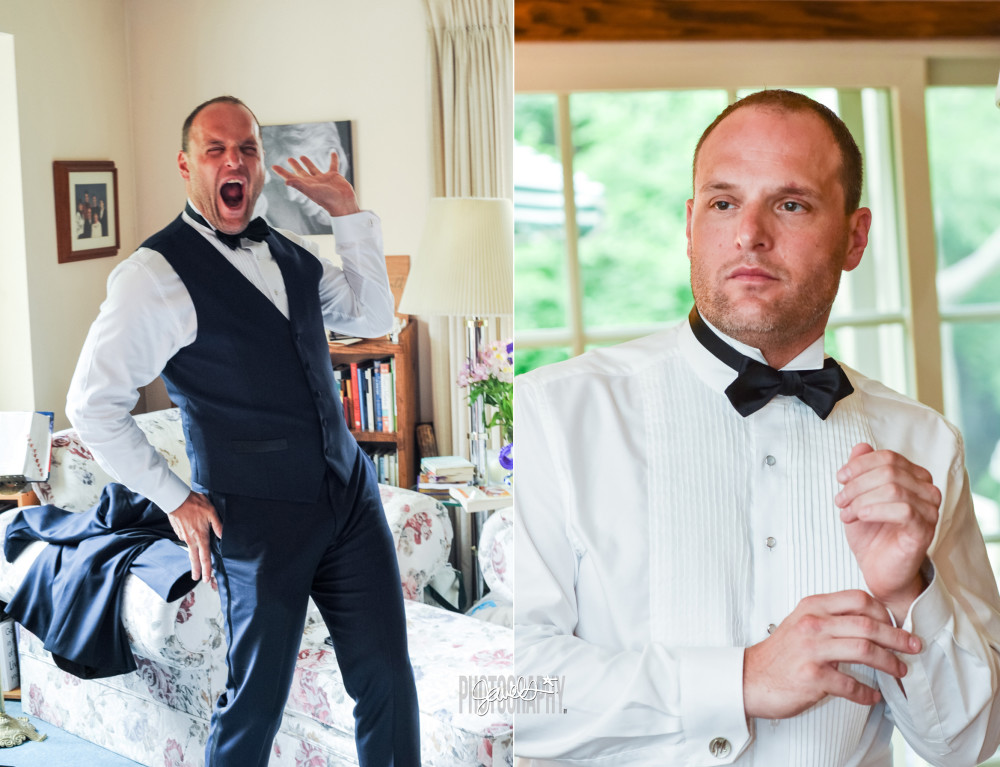 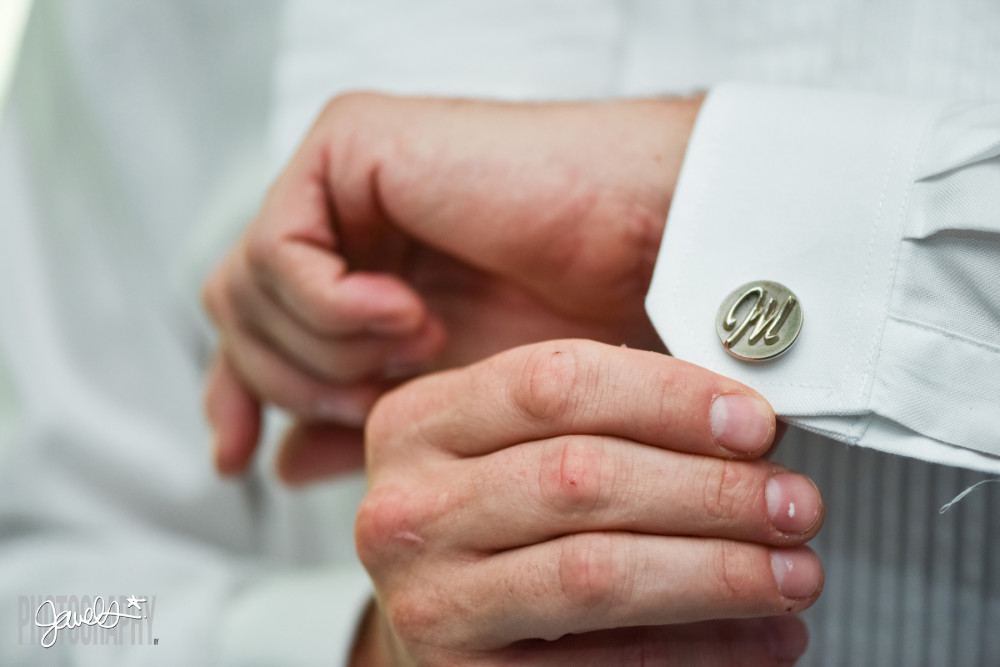 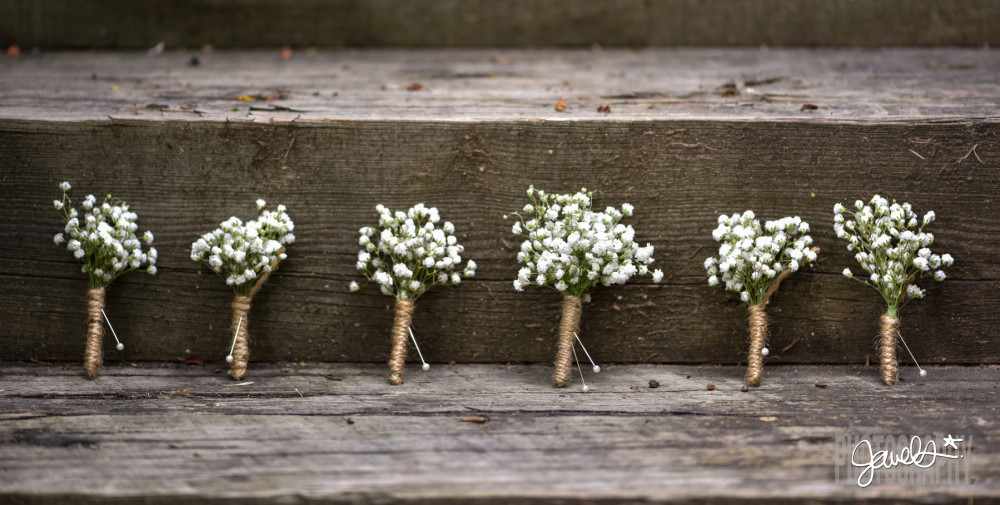 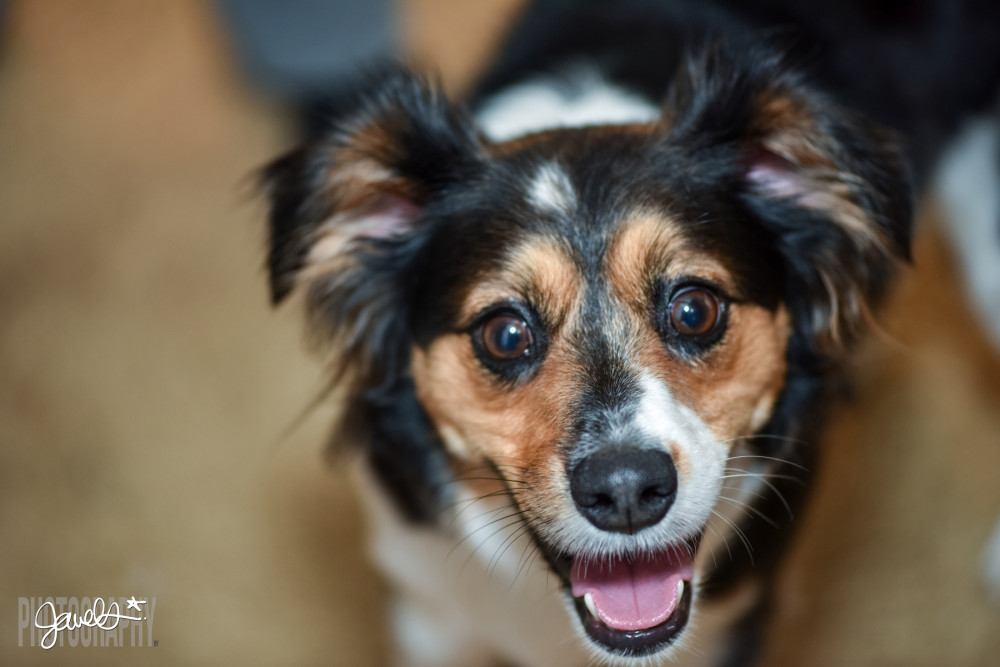 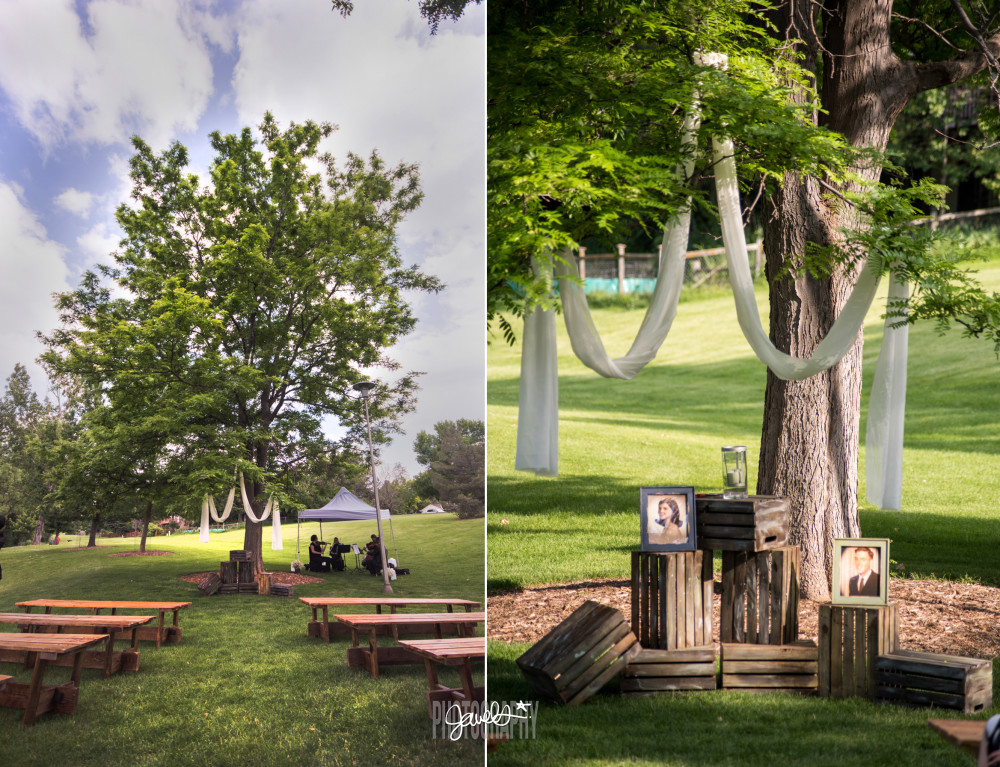 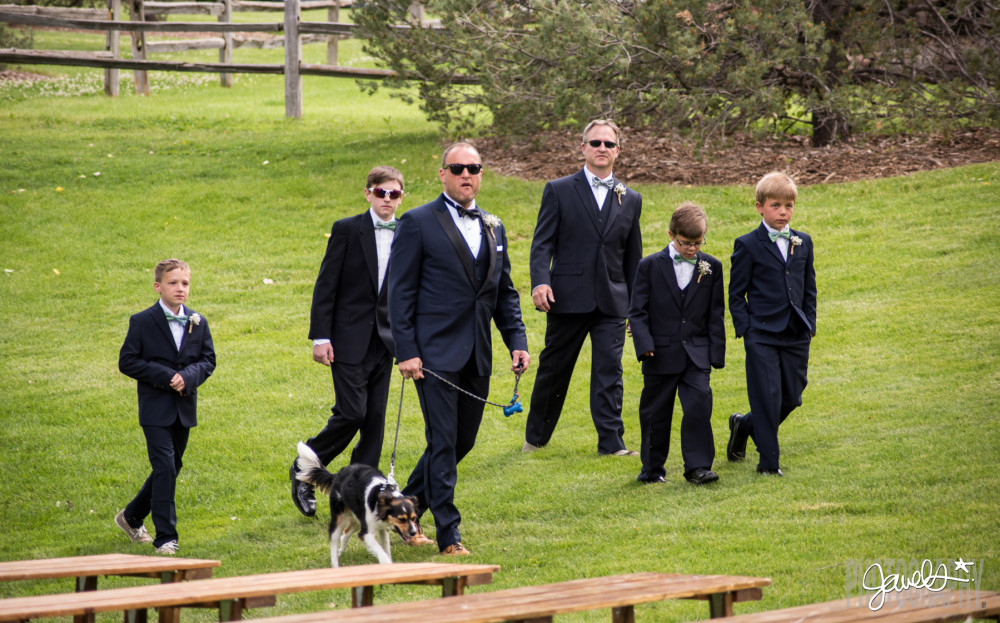 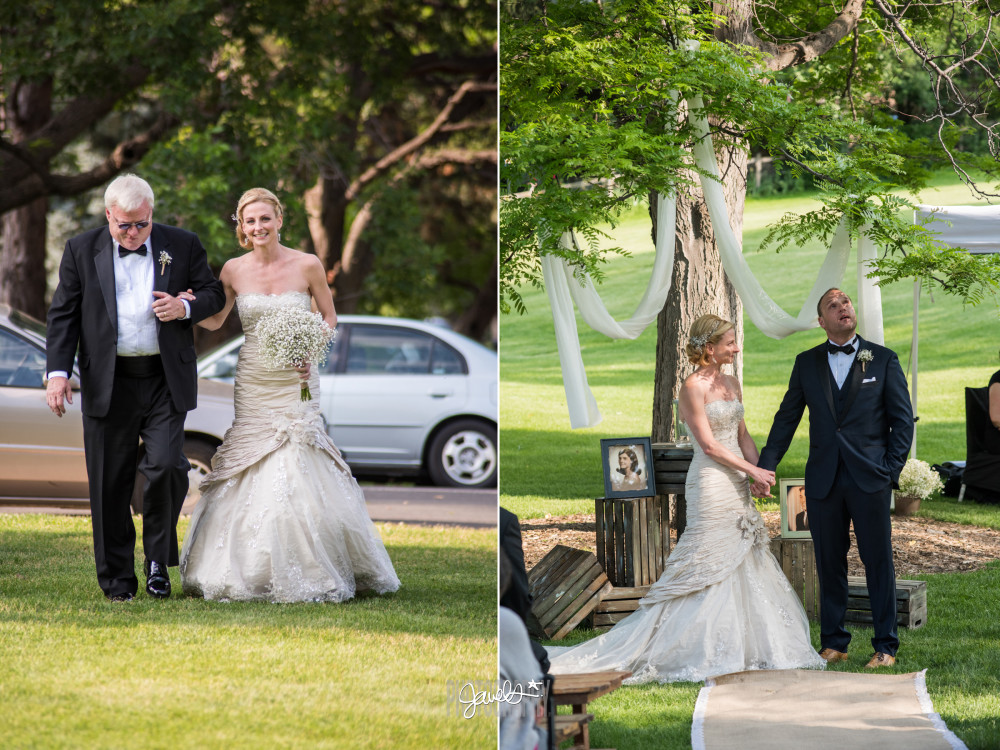 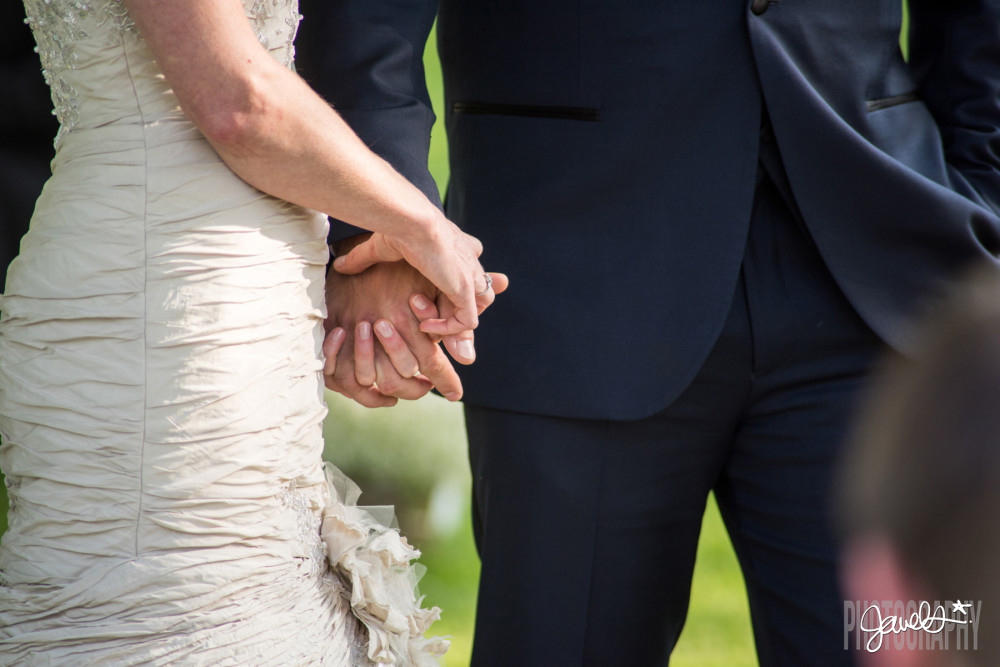 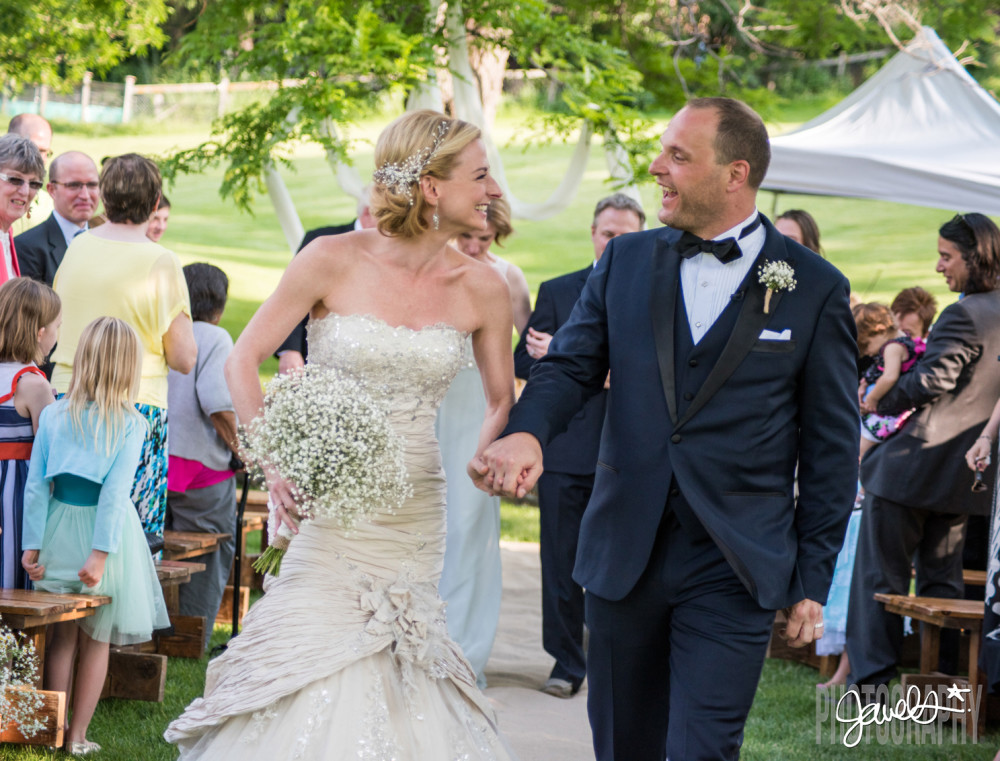 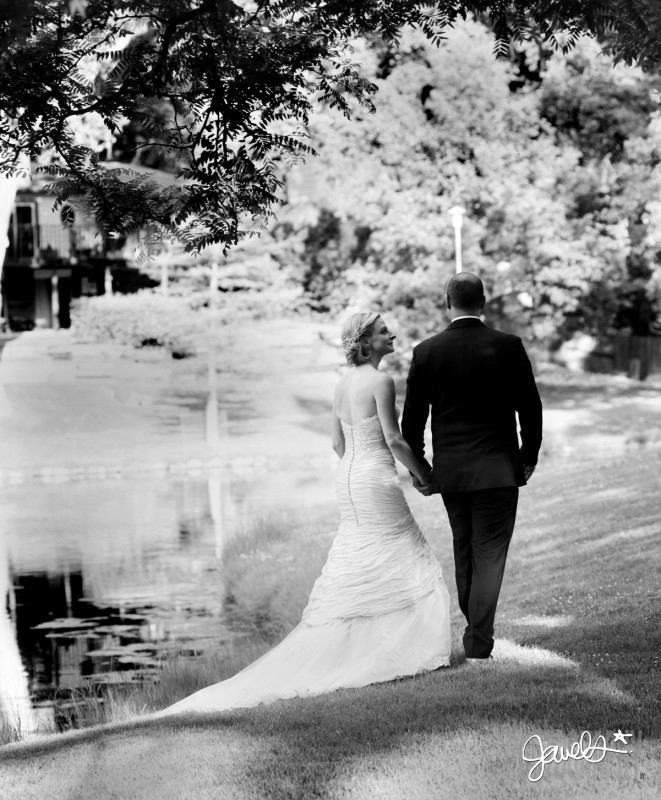 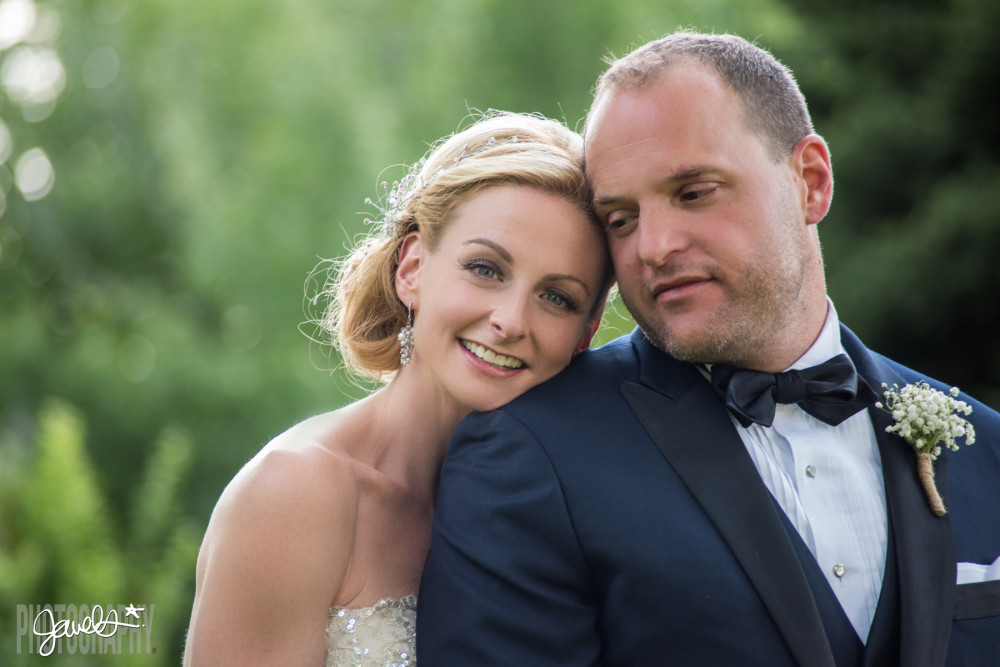 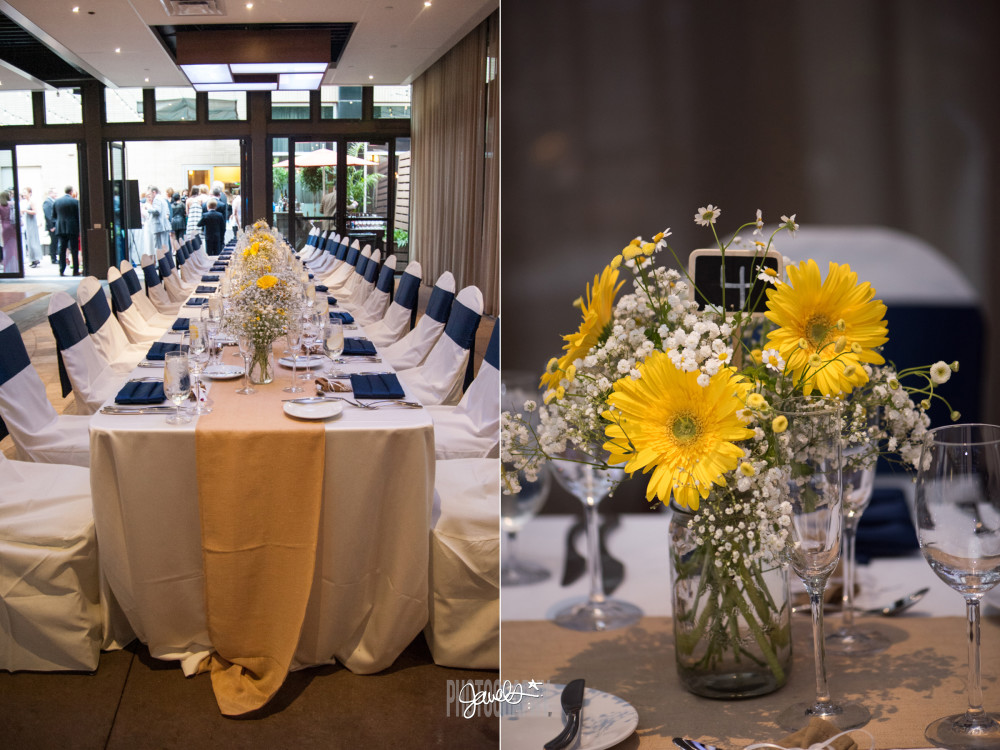 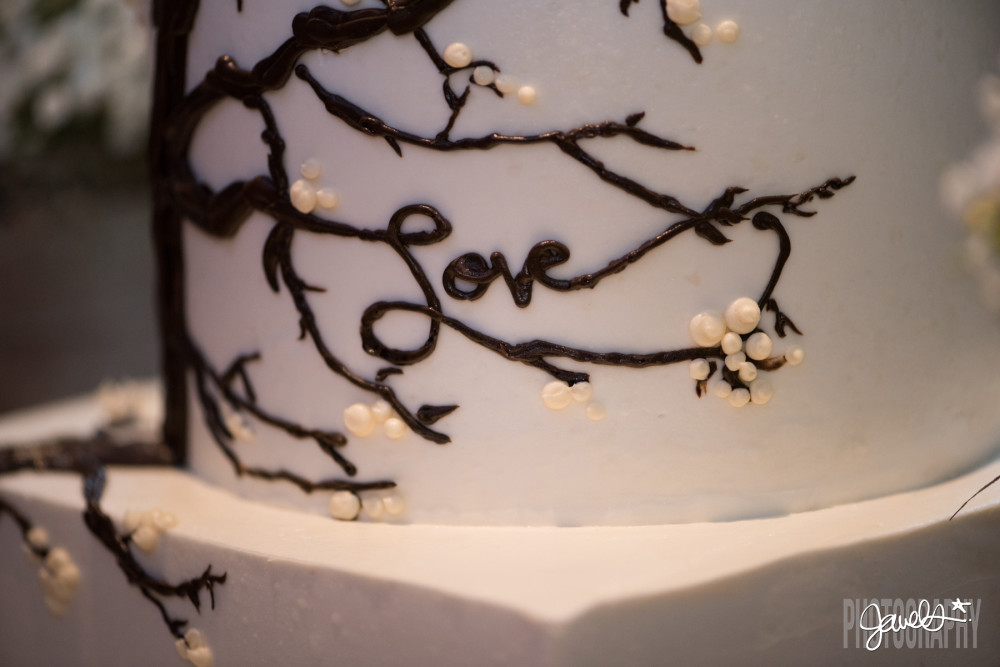 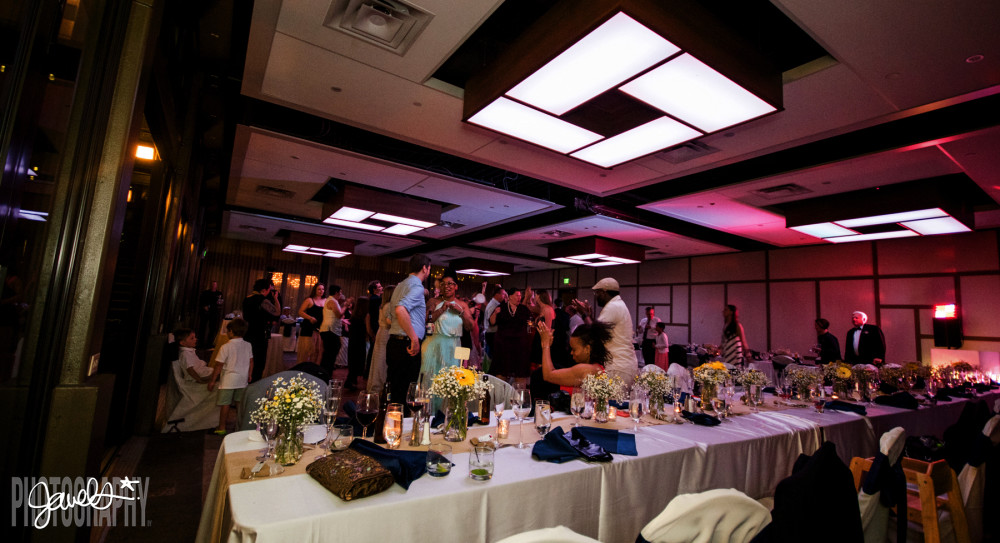 (…as told by Larry himself…)

“Myrtle Beach, SC is home to the East Coast’s longest wooden pier…or something to that effect…truth be told, it is quite un-remarkable in its wooden-ness.  It smells like salmon eggs with a waft of cotton candy and the pungent odor of token-op arcade skee-ball video game grease; the perfect place to propose to Karen.

Yet, it was here, when Karen and I shared a completely innocent walk along the beach (we were both there for work) that we ended up first getting to know one another.  Neither of us had been there in about 4 years when Karen was hired to direct a show that was rehearsing there again.  When I found that out, I knew I had to propose on that pier.  But, that is not as easy as it sounds…cause I am a fucking weirdo.  I thought about proposing to her IN the arcade that is attached to the pier…you know, by giving the ring to the person working the counter where you cash-in your skee-ball tickets and having Karen cash in tickets and get a ring.  But, I wasn’t about to give this wacky Carny (love Carnies personally) potential meth-head the ring I just bought and trust that I would ever see it again.  Then I thought I would propose ON the pier…but I kept thinking that I might be so fucking nervous when I proposed…and what if I dropped the ring and it fell thru the cracks of the pier and I watched my money and future plunge into the ocean.

SO….I formulated a plan:  I found a machine in the arcade that dispensed little prizes in those plastic balls.  One of the prizes was this googley-eyed rubber octopus thing.  So, I tied the ring to one of this little googley-dude’s tentacles…(not to be confused with testicles…very different kind of night)…and covered it with the tag.  I then put the googley-dude back into his plastic ball and arranged for that prize to be THE prize that came out when Karen played the game (no, I will never ever tell how I made that happen…I am magic…boom).  We planned to go to the pier on a Sunday and all day I played like I was in a bad mood and begrudgingly went to the pier.  We played skee-ball, some other dumbass games and then finally I said to Karen… “I’m bored, let’s just play this one and get rid of our tokens.”  Sure enough, we played…out popped googley-dude.  But, you couldn’t see the ring thru the plastic…so I took it and played like it was just a normal dopey toy and we walked out onto the pier…it was dusk.

We walked all the way to the end of the pier and climbed stairs to a look-out platform…and sure as shit…there were a couple of people up there.   Well, I waited and we both stared out over the water and then back to the shore.  But, problem is…this is a place where people come to hang out and stare at shit for a lonnnnnnnnnnng time….not talking, just holding hands and staring and creating romantic memories or some crap…don’t they know I need the space???!.  One couple would leave and instantly another couple would walk up the stairs to replace them and gaze out for another 10 goddamn minutes.

Finally, I was going to give up…thinking that maybe this wasn’t the night…and I was pissed!  I sat on the steps and grunted and grumped about wanting everyone to leave.  Karen was confused….and then suddenly…we were alone and she was sitting on my lap.  Oh fuck.  So I said, as casually as possible, “hey, let’s open up that googley-dude”.  We opened up the plastic ball and I had typed a little note that said a phrase Karen and I have often said to one another.  She saw that and said “wow, isn’t that weird?  What are the odds?”  At this point, I felt like slapping my forehead…oh for the love of Christ.  I reached down, flipped the tag and the ring appeared and just sat there like it was in a box.  Karen was floored and became a blubber mess of joy.   It was awesome.”